The band is embarking on their tour of Norway taking them to:

Posted August 17 2005: During this year’s Řya Festival in Oslo Animal Alpha recieved a gold record for their first ever release, their self titled EP (RJCDS030). The band got the news right after they got off stage. The EP has spent all summer in the TOP 20 singles charts of Norway, but this week it went to sixth place, going to the top 10 for the first time. Their debut album will be out on September 5th!

Check out the dates for their Norwegian tour this fall in the events section... More dates coming!

Posted August 01 2005: The fantastic video for Bundy is now available for free download at our downloads page

. Also check out our other downloads at

. The video is in a high mpg-quality, and will take a while to download. But it's worth the wait...

This winter Norwegian rock comets Animal Alpha was signed to Racing Junior. They're now recording their debut album with producer Sylvia Massy Shivy at Radio Star Studios outside San Fransisco. Sylvia Massy is known for her unorthodox approaches when recording, and from her work with artists like Johnny Cash, Tool, Red Hot Chili Peppers, REM, Smashing Pumpkins, System of a Down and many others.

Her initial idea for the album opener was to record a train smashing a bunch of pianos she wants to get rid of. Another idea was to record drums inside a van driving fast down the hills of San Fransisco... 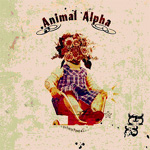